Hiring a rickshaw is normally a negotiation game with the driver. It’s always helpful if you have some idea of how far you’re going. He sets an unrealistically high price, you offer a lower price and you both settle on something in between.

The bus station for Chittor was only 5 minutes walk from the guesthouse. But as we dragged our cases along the road, numerous rickshaws wanted to offer their service. “No, no. Not necessary.” Finally when we were close to the bus station a brightly painted, newly upholstered rickshaw pulled up, the driver singing cheerfully. “No charge sir, no charge.” At first we refused, thinking it was some kind of scam, but he insisted he was going there anyway. “Please come.” This was unheard of. What’s the hidden agenda? When he dropped us off; there was nothing more to it. It really was a free ride.

The moment was made more extraordinary when we saw the rickshaw driver shuffle across the gravel on his hands and one foot, all the time with a smile on his face. His legs were both bent at the knee and he was dragging one foot that didn’t work.

On the train to Chittor, we me a young man who was an official guide for safari treks in the Rajasthan desert. He was full of information on out of the way places of interest in Rajasthan and Gerard listened intently while I was writing the blog. When Gerard left the compartment for a few minutes, the man turned to me and said, “I have had very good conversation with your husband.” We got off together at Chittor and he insisted on carrying my bag. That may not sound much of a gesture but looking at the daunting staircase going up and over the tracks and down the other side, it was not small thing. He wouldn’t unhand the bag until we were outside the station. 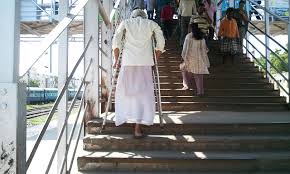 Customary in arriving at a railway station is to be met by numerous enthusiastic rickshaw drivers, all wanting to give us their best price. We’d been told beforehand that the guesthouse was only a five-minute walk, so we insisted on walking. After five hours on the train, anyway, it felt good to get a little exercise. But we were followed. “Just 10 rupees each, sir.” Walking by choice is not a widely accepted practice in India. One kindly round-faced young man called out, “Free service. Please come.” This can’t be possible. Twice in one day? We got in for the short ride with the promise of hiring him to take us to the Fort the next day.

The last random act of kindness that day was from the hotel manager. It happened to be the Hindu harvest festival of Lohri, commemorating the beginning of the planting season. Sweet sesame ladoos are only available at this time. When we asked the hotel manager where we could buy them, he said, “Wait until the evening.” With our dinner appeared two round sesame ladoo balls. He had called his wife at home and had her make them for us. Dry dusty Chitor and our drab hotel room had become brighter.

In Chittor we’ve gone off the beaten track again – the town is dry and dusty, English speaking is limited, and we don’t know what we’re ordering to eat except that it’s veg, spicy hot and oily. The reason we’d come here was to see the Fort, which dates back to 7th C. For over 800 years it was the capital of the Mewar kingdom in Rajasthan. The Moguls sacked the Fort three times, and after the last attack by Akbar the Great in 1568, its ruins have remained virtually untouched. 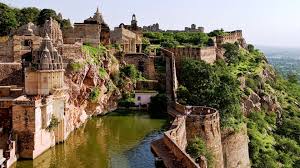 The guidebook told us the entire Fort is 5 km long and 1 km wide and has an unbelievable 33 km tangle of partially ruined walls. Our rickshaw driver from the night before drove us around the collection of palaces and temples within the fort. 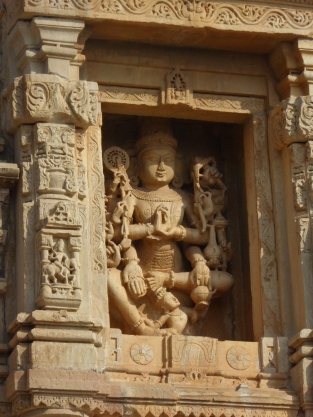 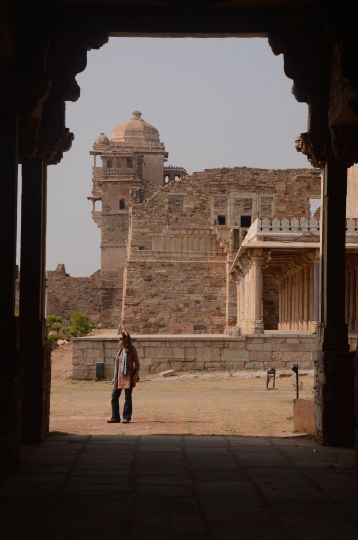 Once populated by more than 50,000, now there’s only a few thousand left, living among the ruins. The most impressive and tallest building is the nine-storey high tower commemorating victory over the Moguls in 1440. Sand colored and carved with religious scenes, Vijay Stambh took a decade to build.

Above the hustle and bustle of the town the air was clearer. In places they’d even attempted to cultivate the dry soil; roses and bougainvillea rose out of the dust.

Our rickshaw driver did not rush us but waited patiently at each site. Finally done, we asked him, “Where’s the best place to eat in Chitoor?” With no hesitation, he said “Bala Ji’s.” And it was very good; an oasis in a dry dusty town. Gerard invited the driver to eat with us. Expecting at best a cup of tea, he was surprised and did join us consuming a stack of chapatis and dal. While we ate I practiced my meager Hindi on him.

At 7.30 am, the hotel staff gave us cheerful send off. 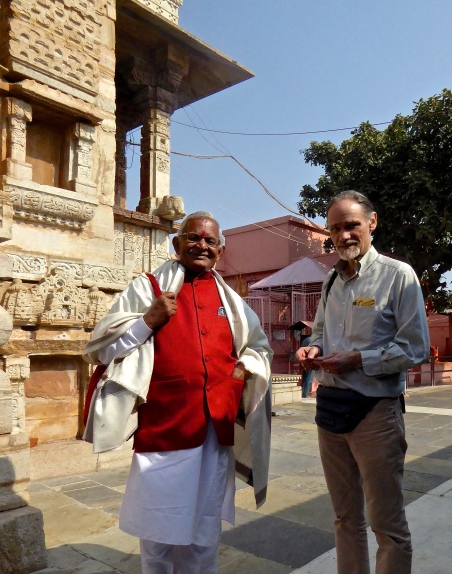 Gerard chatting with a classical musician

7 thoughts on “Fort at Chitorgarth”