Gerard tells me that one of the things he likes about traveling is being forced to embrace the unexpected. But it also involves letting go of what you want and when you want it, not so simple for me.

Our train trip from Bundi to Goa illustrates the need to stay flexible. The train originated in Chandigarh, north of Delhi, and was delayed three hours in reaching Bundi because of fog. A three-hour delay I felt I handled quite well. We boarded the train hoping it might make up for lost time; it was late and we went to bed with that thought in mind. In the morning, rumours started circulating among the chai wallahs that the train was going to be four or five hours late reaching Goa. Bear in mind that we were traveling on a single-track train line. Once a train is off schedule it loses it place in the queue. We were continually waiting at stations to let other trains go by.

As the day progressed, our estimated arrival time continued to grow. A little before our station, a fellow passenger with her husband and daughter was happy to be finally arriving in the night, seven hours late. She said: “It is a matter of congratulations if you are getting off now!”

Back when were boarded the train in Bundi, an elderly Indian gentleman, his thick shock of white hair matching his white Safari suit, sat on the top bunk across from me, looking like a Brahmin gentleman. Propped up  the wall, he was reading his newspaper. He looked over his heavy black frame glasses watching me struggle to make up my bunk for the night. In 2AC we’re given a paper parcel of clean sheets and pillow.

Observing my efforts to reach my top bunk, he joked, “You’re trying to make it perfect with hospital corners and all.” I defended that at least I wanted to start the journey perfectly, knowing full well that the sheets would end up in a twisted mess. He returned, “In India, you have to go with the flow.” I feigned agreement, not registering that his odd accent and turn of phrase were not typically Indian. The next morning, he greeted me with, “I’m sorry I laughed at you.” It was then I realized he had strong Scottish accent. During the journey, he launched into his story. (As a young boy he was called Akeem.)

Akeem’s father immigrated to Edinburgh from the Punjab after Partition. The family had owned a farm in Pakistan, but lost the land. The Pakistani government was supposed to compensate. The problem was that when they crossed the border into India, the Pakistanis took their birth certificates, deeds etc. and burned them so the government didn’t have to provide compensation. (The Indian government did the same in the other direction, for those crossing into Pakistan).

In Scotland, his father sold clothes door-to-door out of a suitcase. Akeem was only ten years old and spoke no English. When he went to school, the headmaster, who happened to have been to India, gave him special help, but he learned the language most from playing with the local kids.

When Akeem was 15, his father wanting to return to farming, decided to go to America. But with his Muslim name he continually ran into roadblocks. A friend suggested, “Just change your name and you’ll have no problem.” And that’s exactly what happened. He changed the family name from Bakshir, meaning ‘scattering of truth’, and Akeem became Alistair Ross. His father settled in Sacramento Valley and planned to stay two years before bringing the family. But aged only 38, he died of a massive heart attack.

Back in Scotland, Alistair was forced to leave school just before graduating and went to work in the coal mines. It was regular work in the area and paid well. The mines also sent him to college part time while he worked. Finally he graduated and became an inspector. He worked for the mines for many years, toward the end as a consultant. Then at 48, he took early retirement. He thought he would go back to school for a degree in accountancy to round out his consulting skills. But when he looked at his mining pension, he thought, why bother? I can live comfortably on the pension.

Along the way, he married a Scottish woman and had 5 children. One girl immigrated to Australia, another became a lawyer. Two sons died; we didn’t like to push why. When the first son died, it put a huge strain on the relationship. When the second son died it was too much, they went to separate parts of the house and grieved alone. It ended in divorce – Alistair had not only lost two children but also his wife. He set her up in a flat and moved himself into a retirement community where he now amuses the other residents by traveling every winter somewhere warm.

He enjoys Scottish summers and has no intention of moving back to India permanently. A while ago, he did return to the village in Pakistan where his family had lived. He hoped to reclaim some of their land and submitted an application. A many page document came back. It contained all the information he’d given about himself and his family, and at the end merely said, “No record available.”

Having this travel companion tell us his interesting story helped the frustration of being on a train seven hours late that continually stopped. 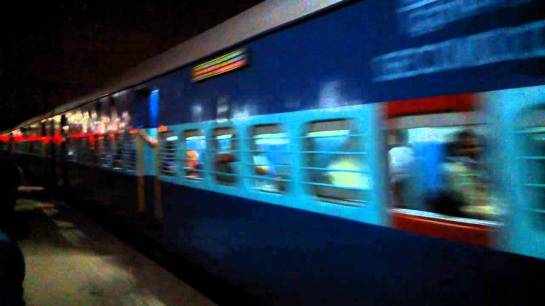 6 thoughts on “A long train ride”