Our long weekend in Mumbai was more than a convenient break in a long (42 hr.) train ride from Goa to Varanasi. It was a wonderful chance to reconnect with the Shinkar family. They immediately make us feel at home in their apartment, an oasis of cool comfort, in central Mumbai. Thirteen floors up, it looks out on a sea of new high-rise building construction. It’s our third visit and in a relatively short period of time we’ve become part of the family. This has also been our experience with other families in India.

We first stayed with the Shinkars when we attended a meditation program of about 2,000 people in Mumbai three years ago, organized and managed by our host, Subodh. He’s a successful businessman in a high-pressure world of finance but is always ready and willing to do whatever he can to be helpful. And picking us up at 11.30 pm on Friday night exemplifies this. We particularly like to hear his stories of going to the ashram in Rajasthan and the Indian perspective.

After almost two months of eating in restaurants, any home cooked food would have been a refreshing change. But that would hardly describe what was in store for us. At each meal we were treated to dishes we’d never tasted before. Subodh’s wife, Sunita, is an excellent cook who explained how she learned regional cooking, Gujarati, Maharati, Punjabi etc. from different members of the extended family. Each time we sat down at the table she surprised us with a variety of dishes that we’d never seen or heard of before. (And who said vegetarian food was boring?)

We have a special fondness for Subodh’s parents who also live in the apartment. Damu met Gerard’s brother at a retreat in the late 80s and we first connected with Damu about 10 years ago. His wife, Kudum, speaks very little English but has a laugh so infectious that we laugh along with her, often having no idea what the joke is. We all get up in the morning to meditate and she’s sitting at the dining room table drinking chai already finding humor in something, spreading the joy.

Subodh’s sons, Nirmal, in seventh grade and Sunil in second year college, were both about to enter the exam period and studying hard, but they graciously gave up their room to us without showing any sign of being inconvenienced. Sunil had adopted an optimum study schedule, staying at the library all night, and sleeping during the day, amidst a household of noisy activity. This meant we hardly saw him at all. With 1.3 billion, these kids are under huge pressure to excel. Nirmal perseveres with his studies during the day, breaking the tedium by singing, usually a popular western song, much to the amusement of the rest of the family. He’s a natural entertainer, and it could be in his future.

Once again, Subodh and Sunita took us out on Saturday evening and drove around some of the older parts of the city: Colaba, home for generations to rich Farsees, Church Gate beside the Raj built train station and Marine Drive where families promenaded beside the ocean in the evening light. Driving around the confusing and crowded streets, Gerard asks Subodh if all the traffic stresses him out. He says, “No, I’m used to it. I grew up here.”

Our last night, Subodh and his parents took us to an upscale, family style, veg restaurant. On the way, Subodh and his mother sang bhajans. Again we were introduced to a variety of local dishes Subodh wanted us to try.

Our train tickets for Varanasi were “Reservation against Cancellation” which meant we weren’t notified until the night before if we actually had confirmed seats or not. This caused a certain amount of anguish…and relief when we finally got the computer confirmation and carriage and seat numbers. With trains of 22(?) carriages, you need to know your own carriage to be able to find it on the platform.

Our train left very early Monday morning. We insisted on taking a cab; everyone had a busy day coming up. But they wouldn’t hear of it. And like family, Subodh and Sunita, gave us a heartfelt send off from the platform. The weekend had been too short. 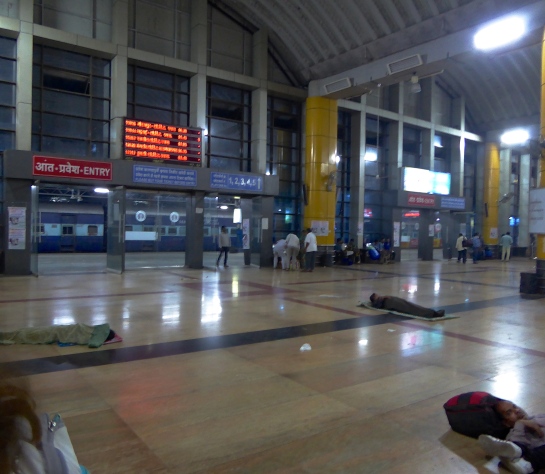 3 thoughts on “Stopover in Bombay”