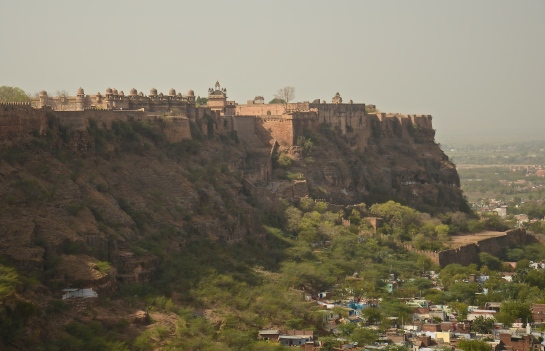 On the way back to Delhi we made an overnight stop in Gwalior to view the 18C hill Fort. Surrounded by sandstone walls, it encloses three temples and six palaces. One day seemed long enough and we planned to continue to Delhi early the next morning; but we had not taken into account the vagaries of train travel. Expecting to arrive in Gwalior at dawn, it was already midday when we finally got down, giving us only a few hours before the Fort closed. The hotel we had booked turned out to be unacceptable and our rickshaw rider had to take us to several alternatives before we decided an over priced but suitable one. After a quick lunch, we again set off in 95F heat to tour the Fort.

Equally interesting were Jain temples with statues dedicated to the Tirthankaras, teachers of the Jain dharma, carved out of the cliff below the Fort. Just enough time to see everything before night descended.

Back in Delhi, our usual hosts, Kamal and Bhushan were visiting their daughter, Shruti, in Bangalore, so we stayed with her aunt and uncle who live one street over in Gurgaon.

Swarn loves to cook and we were the benefactors. A well-appreciated break from restaurant meals. Gerard and Ravi talked a lot about painting; he’s semi retired and is taking up the brush. He’s a great enthusiast of ghazelles, poetry from the Mogul period, and Quawwali, which is the poems set to music. He’s particularly fond of Rahet Ali Khan, who first recorded when he was ten years old. I found it mesmerizing. If you’re interested here’s the link. Fast forward the first few mintues.  Ustad Rahet Ali Khan

After reading William Dalrymple’s book on his love of Delhi, City of Djinns, both of us had renewed interest in exploring the Mogul city of Old Delhi and signed up for a three-hour walking tour. With only three of us, it was semi private and our young guide was well-informed and gave us tidbits of information that you wouldn’t normally come by: i.e. women wearing red and white bangles to indicate the first year of their marriage; ‘ear cleaners’ are identified by their red scull caps with a Q tip behind their ear. When Gerard comments at the tangled mass of electrical wires over our head, the guide commented that 80% of the connections were illegal. It’s got to the point that the electrical company cannot determine which connection is legal or not. 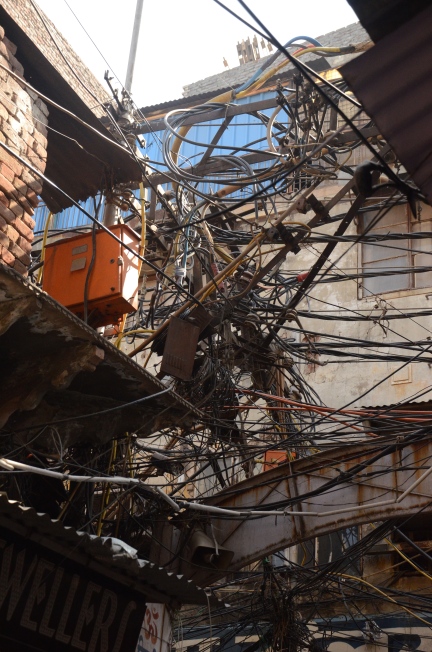 The section of Old Delhi nearest the Red Fort once was famous for its elaborate haveli’s, occupied by families connected to the Court. Now only 500 remain, and out of that, only 17 are still ancestral homes. The rest are in very sad shape, used as warehouses on the ground floor, with cheap rooms for rent above. 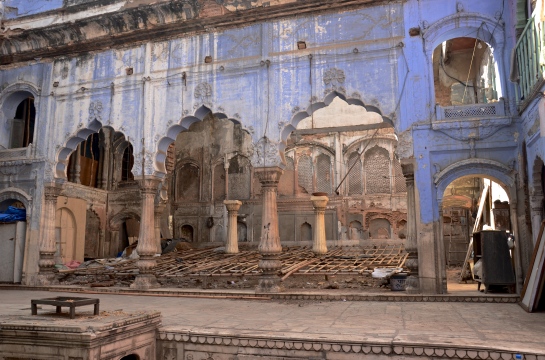 As our guide led us through the maze of back streets, Gerard felt confident that he could navigate on his own. But as soon as the guide left us, he was hopelessly lost. Even his compass failed in Old Delhi. My personal guide had let me down.

Because of the Holi festival there was some delay in getting overnight bus tickets, ‘semi sleeper’ (this term is accurate because you really can’t sleep) to Himachal Pradesh, but it gave us time to spend with Swarn and Ravi and for Gerard to get over his lingering cough.

2 thoughts on “City of Djinns”