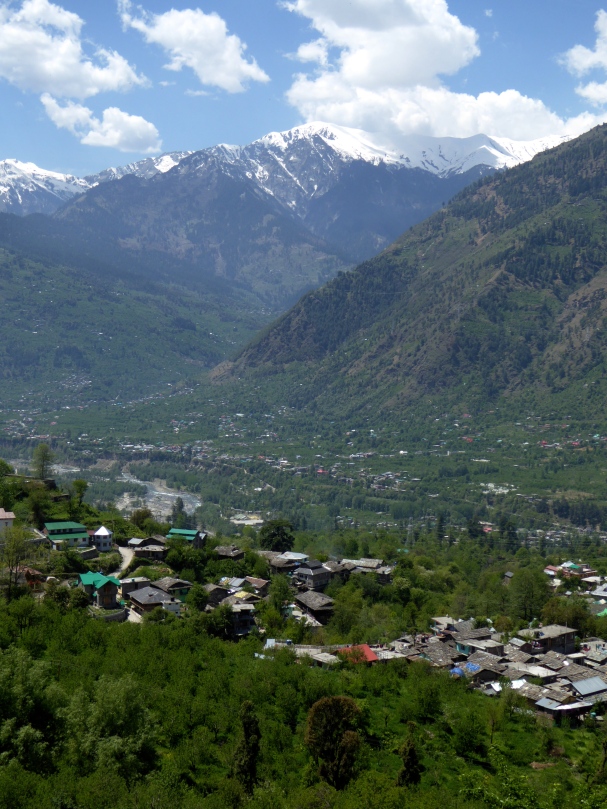 At almost 7,000 feet, Vashisht is our last stop in the mountains. Nearing the head of the Kullu Valley, the town looks directly up the Rothang Pass toward Ladakh. As the valley beside the River Beas narrows, the mountains move closer. 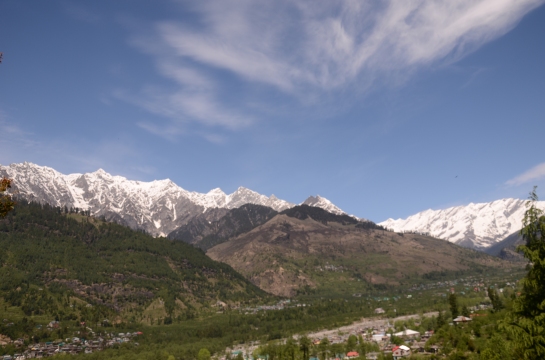 Vashisht is larger than Naggar but the habitation in the valley is sparser. With steeper terrain, terracing is harder, leaving only apples for cash crop. 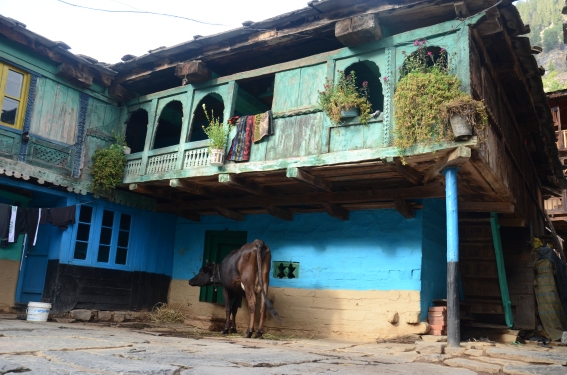 These old style houses that we love so much were built to accommodate cows on the ground level with porches on the second floor extending out. They’re somewhat reminiscent of cottages in the Swiss Alps. The cows are kept outside on the terrace during good weather and as the temperatures drop they’re brought indoors, helping to warm the house. Our guesthouse is in amongst these houses, lending to the sensation that we are staying in a farmyard. 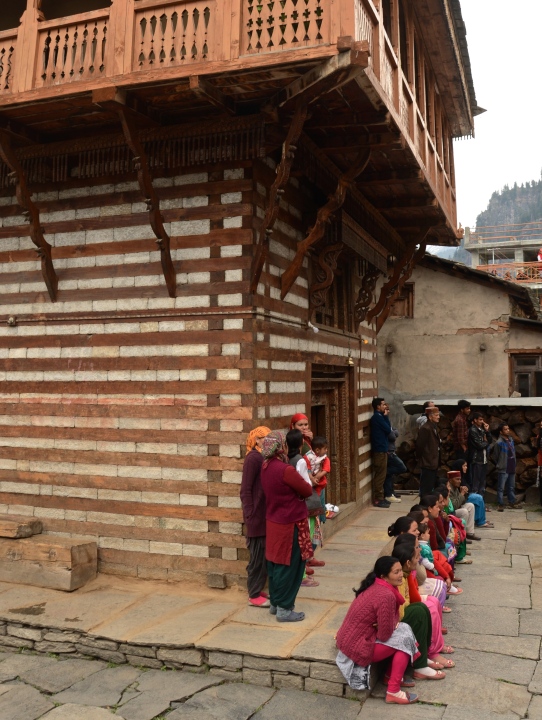 In the center of town is a temple, believed to date back more than 4000 years. Adjoining it is the third sulphur hot spring in the Valley. The town was named after a holy man, Rishi Vashisht. Legend has it that after learning that an opponent killed his children, the saddened Rishi tried to commit suicide. But the river refused to kill him. So the river was renamed Vipasha, which means ‘freedom from bondage’ and later, shortened to River Beas. The Rishi vowed to start his life anew and began meditating. When Lakshman, the younger brother of Lord Rama, paid a visit, he realized that the sage had to travel a great distance to bathe. So he shot an arrow into the ground and hot water began to gush out. 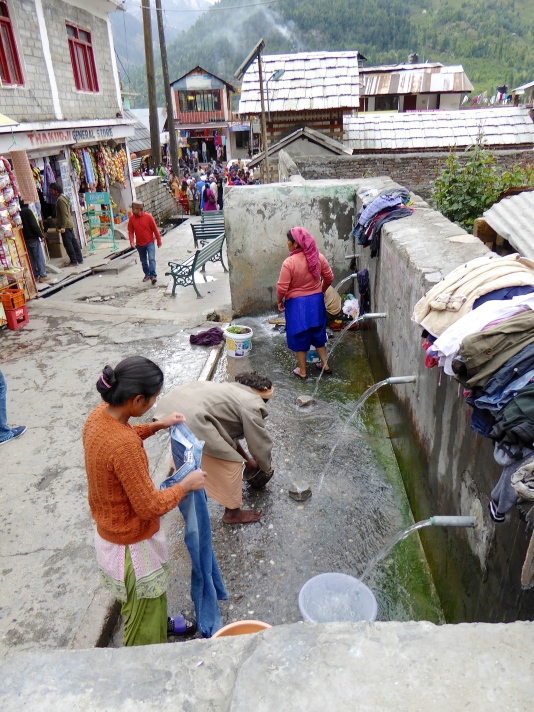 Hot water is still gushing today, and there are always people bathing or clothes washing beside the temple.

It was our good fortune to arrive at the end of a Kullu festival. Full of mystique and folklore, we understood only that a ‘local goddess’ lives in the temple and is brought out to give his blessing at the time of festivals.

Twice we watched the richly decorated effigy being carried on a palanquin in a colourful procession from the temple and paraded through the town. Large horns and drums led the procession. Gerard’s comment is that it sounds something between the snake charmers of the Jaama el Fna in Marrakech and Cecil Taylor’s Big Band. Legend has it that the goddess leads the procession not vice versa. We watched as the ‘Gur” (spokesman of the goddess) went into a gyrating trance in front of the palanquin. 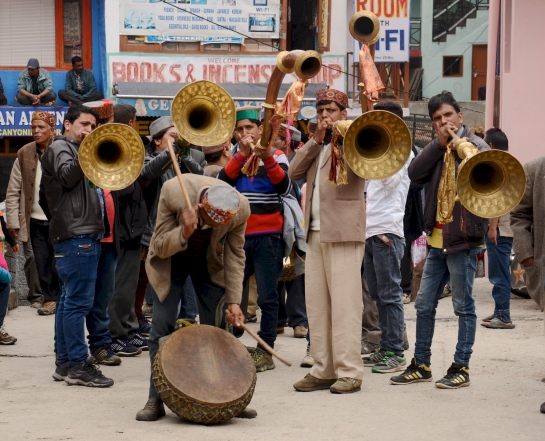 This event and many others that we’ve experienced throughout India are examples of the mystery that is still so present when you look for it. Perhaps less so on the streets of Mumbai or Bangalore, or any other city that has been strongly influenced by the West. But it still may be there; just harder to recognize buried under consumerism. It reminds both of us of a quote by Paul Bowles. He defined mystery as “…a secret connection between the world of nature and the consciousness of man. A hidden but direct passage that bypasses the mind.”

As we stood in the crowd, we recognized a young couple from Kerala we’d first met in Naggar a few days ago. Commenting on the unorthodox nature of the ceremony, the girl said, “There’s many things we don’t know, but that doesn’t mean they don’t exist or aren’t true.” Gerard replied, “The older I get, the more I realize how little I know.” 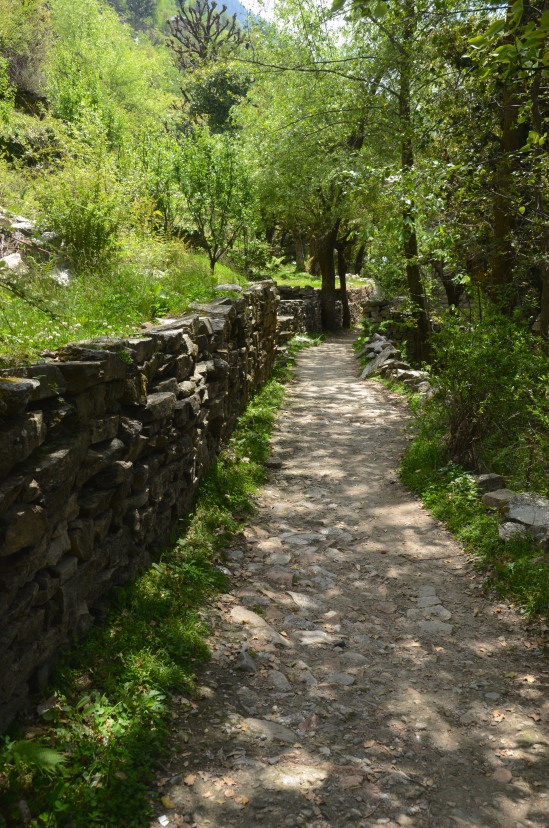 After a leisurely breakfast, we pick one of the numerous trails that lead out of town into the forest. Being from New England, Gerard has a soft spot for stone walls. The goal is to reach one of the many waterfalls that spout out of the mountaintop.

The stones on the path, filled with mica, shine in the sun like a thousand diamonds.

The path often guarded by ominous looking lizards warming themselves in the morning sun.

Further on, the path winds its way through evergreen forest, standing tall in majestic silence.

The higher and closer we get to the waterfall, the more impenetrable the path becomes with thorn bushes and sliding rocks.

Only once did we actually reach the base of one of these gigantic falls, water spraying as it cascaded down the rock face.

As our stay in one place winds down, it’s our normal tendency to start thinking about our next stop. But that’s not the case in Vashisht. It’s not because we have such presence of mind to stay in the now; it’s more to do with the fact that we know Delhi has been well over 100F for the past ten days and will remain so on our arrival. A shock to the system after a month in the cool weather of Himachal Pradesh. In fact, with the exception of the Himalayas, most of India is suffering under a severe heat wave. But we are looking forward to seeing our adopted family in Delhi again.

11 thoughts on “Pathway to the Sky with Diamonds”