We left Gokarna by bus first thing in the morning. Quite simple — we wheeled our cases out of the guesthouse round the corner to the bus station, stopping on the way for chai and banana buns at the little corner restaurant, open early by Indian standards. The bus pulled in and we hauled on our “small” cases and backpacks and left right at 8.15 as scheduled. A cool breeze wafted in through the open window. So far, it was a lot easier than we’d speculated. 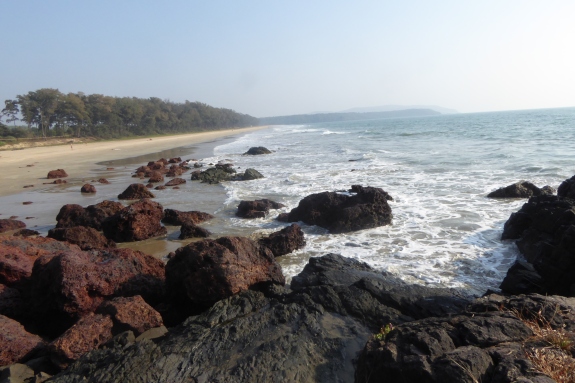 We told the conductor we wanted to get down at Mashem. He had to consult his list of stops, asking us three times. I guess tourists don’t get off at Mashem, The conventional way to get to Guljibagha, our next destination, would be to stay on the bus and go to the market town of Chaudi, and then backtrack in a rickshaw to Guljibagha. But Gerard had noticed on Google maps a much more direct route: get down at Mashem before the highway turns inland and follows the river away from the coast. On the map, there was a broken line indicating something going across the river from Mashem to Guljibagha. “That must be a ferry crossing,” he said. “How do you know?” “I don’t but let’s give it a try.” 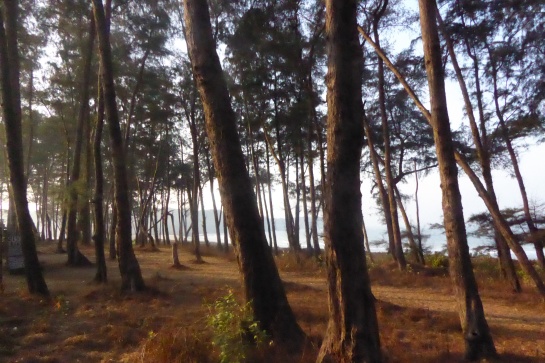 Gerard noticed the tell tale landscape of Guljibagha across the river and asked the conductor, “Mashem?” His response was, “Oh!” And he blew his ear-piercing whistle for the bus to stop. Leaving us at a tiny intersection with no signage, we backtracked down the road assuming we’d overshot the ferry stop. After a while, we asked and old woman and her daughter-in-law standing in their front garden. We were strangers at the door. They actually seemed glad to see us, pointing back the way we’d come and saying just go straight. But what is straight in India? Staying on the main road or literally going straight down a dirt track? We chose the main road. After walking for some time, Gerard says, “This doesn’t feel right. Let’s ask again.” Another woman was more than happy to help us. “Go back the way you came and take the right turn on to the dirt road. The boat rests on each side for 15 minutes.” So here we are back where we started.

Just around the corner, there was the river and on the other side we saw a broken down old boat…that must be our ferry! We waited 15 minutes and the boat arrived. We rolled up our pants, took off our shoes and waded across to it, hoisting our cases and backpacks into the boat. The boatman pushed off from shore and we slowly made the short crossing to the other side. But what about the fare? The boatman strode away without looking back. The government pays, a fellow passenger told us. Another surprise.

We had arrived in a construction site. We’d heard about the interstate highway development that would go right through Guljibagh. Here it was! Again we didn’t know where to go. Out of a house alongside, a boy appeared. “ My mother woke me, saying there’s tourists coming and they may be in trouble. Go talk to them.” He was bright and alert for having just woken up. “Let me show you the way to your guesthouse.” We pointed to the construction and asked him how he felt about it. He said, “I hate it. Everybody in the whole town hates it. Pointing to the midst of the rubble, he told us his family used to have a guesthouse there. “My father bought the land 30 years ago and the government is now paying him only 3 Rs per meter compensation.” Another sad story of public works schemes in India that has little consideration for the locals. Arundhati Roy (‘God of Small Things’) has written in depth about just such bullying by the government, in her case, regarding dams.

He pointed us down a lane — you’ll find your guesthouse there. The spacious room we had booked in Telly and his wife’s home was perfect. The tiled roof extended over a small porch, facing the sea just a few feet away, through a thin line of tall skinny trees. Almost perfect, save for the puppy that barked and whined outside our room half the night.

Unlike other Goan beaches, Guljibagha was not first discovered by the hippies thirty years ago, and then developed commercially for tourism. A fishing village, it remained undiscovered until a few years ago. Today, there is very little accommodation; ours is virtually the sole guesthouse, along with one pricey accommodation, a collection of fancy huts. Also some very basic shacks and a few rooms for rent in private homes on the back lane, the “available” signs indicating few takers. A couple of out door restaurants sit facing the sea. Their prices exorbitant with a heavy emphasis on fish. We made arrangements with our landlady to prepare breakfast and dinner for us. She cooked a great fresh coconut veg curry!

The locals have their sights set on the high-end tourist. There are already beach sweepers and lifeguards, even though the beach is almost empty. So we have an arrangement with Telly’s wife who makes us breakfast and dinner. Making your own meals is not an option; there’s little available in the couple of village stores; you have to go to the nearby market town for fruit and vegetables. No entertainment, no loss to us…just the sea, beach and each other. We swim daily and walk the beach, watch crabs dart across the sand laying their eggs, scurrying sand pipers, and strutting egrets. Flocks of birds fly in long lines of formation; a sole bird breaks out, flies around as if confused and then regains his senses and returns, closing the break. 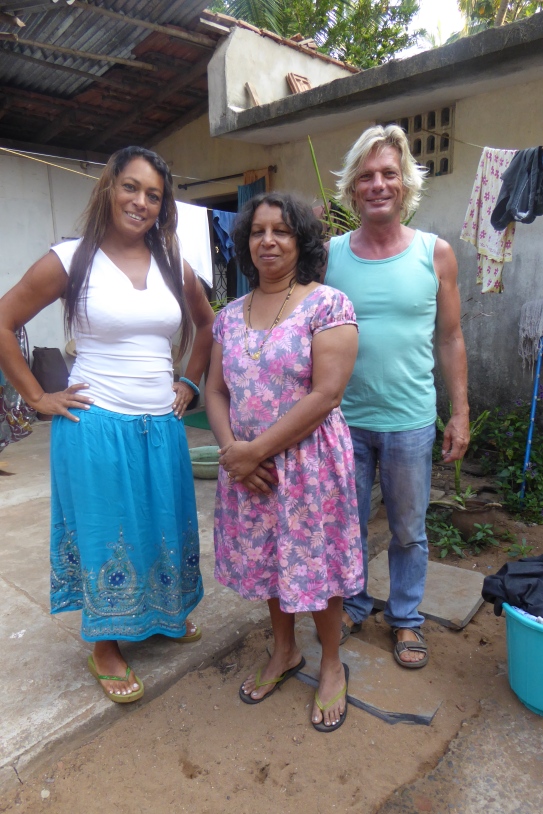 Even in Guljibagha we make friends – a Swiss man, Urick, with his Brazilian girlfriend, Joana,  who have been staying here for several months. (pictured above with our landlady). Urick is suffering from over-exposure to microwaves. i.e. cellphones, WiFi, computer screens etc. He was in hi-tech for many years until he realized the cause of his ailments. Guljibagha is perfect for him because there’s no wireless service at all.  The last afternoon, Johanna took me for a walk through the north side of the village. Down a long sandy path beside the beach, over hung with palm trees, flowering bushes and scrub, we walked past a row of simple houses and huts. Sleepy activity in the afternoon sun. Finally, we emerged at the far end of the beach. Joana insisted I clamber over the rocks to view a neighboring beach, another long virtually empty stretch of sand and blue water.

Returning back through the shady lane, we came across a large gathering of women and children in the front yard of one of the houses.

Recognizing Johanna, they called out, “Come and join us. Eat and drink!”  Everyone was dressed in their best colorful clothes – one woman wearing brightly colored headdress appeared briefly and then disappeared into the house. “What is the celebration?” we asked. It was a party for a seven-month pregnant woman, a Goan tradition. The guest of honour with her elaborate headdress had now disappeared to my photographic disappointment.  But the other women insisted we come in the house, and sit in the dark interior of their kitchen in the rear –  a single naked lightbulb hanging from the tin roof ceiling.  Husband and children joined us; it was all very jolly with plenty of laughter, reminiscent of days gone by.

As the highway nears completion the sun will set on this tranquil place. 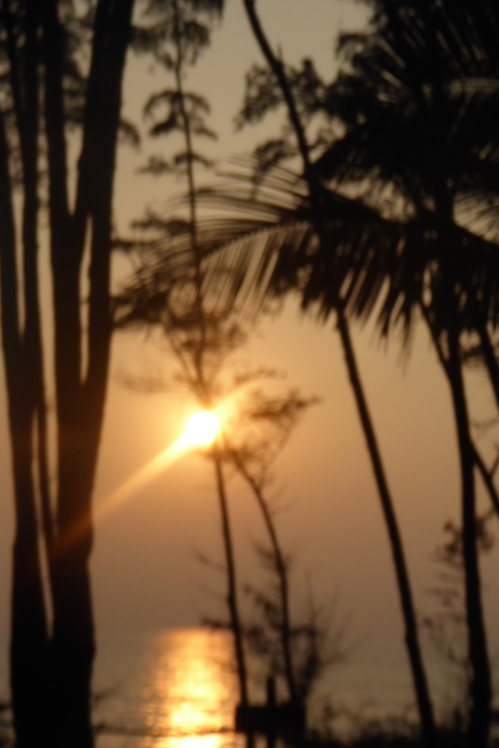 6 thoughts on “The Sun sets on this Tranquil Beach”