Rajesh is our oldest friend in Varanasi; we met the first time we came nine years ago. Through the years, we’ve become more than just acquaintances. This year, when we stopped by his stall near the Golden Temple he said, “You must come to my sister in law’s wedding in just a few days.”

When we voiced concern about not having the appropriate attire, he said, “We don’t judge people by what they wear but what’s in their heart and you will be most welcome.” Moments later, Rajesh’s father in law appeared and after only a glance, handed us an invitation to the wedding. He also put to rest our concerns about dress. When Gerard asked him how he knew us, he said, “Our whole family knows you. Rajesh has mentioned you through the years and we’ve seen pictures of you on FB.” Rajesh added, “And we all read the blog!”

After I’d had time to consider what to wear I realized my case was too small to accommodate this festive occasion. A new outfit was required. By happenstance, over lunch at Shree Café, Uschi, another friend of ours who’s in the clothing industry here, recommended a ready made store where we should ask for Deepak. Deepak couldn’t have been more helpful, and after a relatively short time I’d made my purchase and it had been sent off for alterations.

Thinking we were arriving fashionably late, we were, in fact, one of the first to arrive at the wedding – one must always remember Indian time. Everybody was very welcoming and when Rajesh showed up he introduced us to all the different family members. 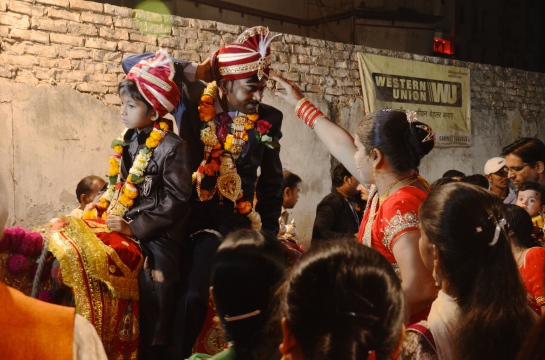 The groom finally arrived in usual fashion riding a white horse, led by a band and followed by frenetic young dancing guests. The groom was seated on the customary couch for photos while his bride was led to him under a canopy. 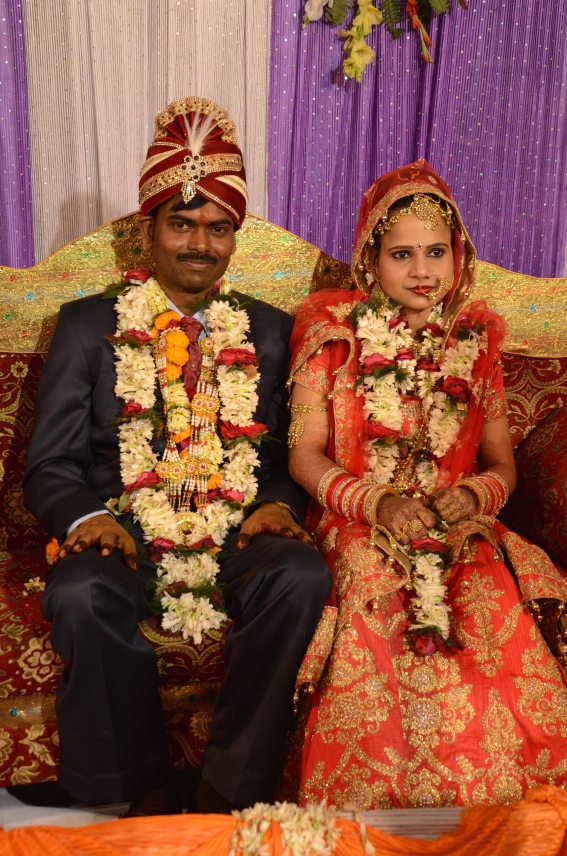 They’re obliged to sit for hours, posing for endless pictures. We took the opportunity to go up to the roof where plentiful snacks and main course meal were laid out. We had a chance to talk with Rajesh’s older brother’s wife, Megu, who’s from Japan. She met her husband 15 years ago in Varanasi and they now run a renowned Japanese restaurant here. She appreciated the fact we couldn’t talk to everyone and seemed happy to spend time with us. Eventually, we went back downstairs where the photo shoot was still in progress. We’ve both commented on how patient the couple have to be to pose for a myriad of pictures. Along with maybe half the 500 guests, we left before the actual ceremony – not apparently that unusual. 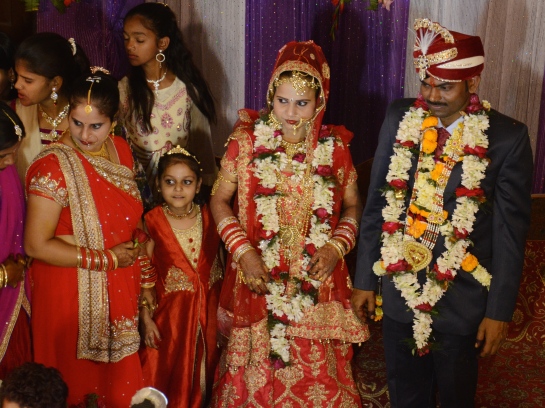 2 thoughts on “A Varanasi Wedding”