The build-up toward Holi begins several days before, with bowls of bright colored powder, laced with silver, alongside plastic pistols, appearing for sale in the lanes. When mixed with water, the powder becomes indelible. Plastic bags are filled to make bombs, pistols used to spray the toxic solution, and in a ‘ceremonial ecstasy of colors’ Holi is celebrated with enthusiasm.

This year, the holiday coincided with the five-year local elections in this state, Uttar Pradesh. Voter turnout was high with huge support for PM Modi’s BJP party, especially among the young and poor. With the announcement two days before Holi, of BJP’s victory in UP for the first time in 17 years, Varanasi erupted in loud celebration – men donned orange paper Nehru hats with the letters BJP and accompanied with drums, processed through the streets.

On the morning of Holi, we hid out in our guesthouse. We’ve witnessed several Holi’s and have no desire to be sprayed with color that ruins our clothes, stains our skin and stings eyes. It afforded us the opportunity to spend the morning getting to know a British couple staying in our guesthouse. They’re close to our age and have traveled extensively in India since the ‘90s. Living an unconventional lifestyle, outside the UK for twelve years, they’ve resettled in Devon, on the edge of Dartmoor, close to where I grew up. Other than just loving India, Premgit comes to photograph. He still uses film, dark room and has built up a following for his black and white pictures. http://www.premgit.co.uk/ There was a lot that we had in common — boarding schools, yoga, Coltrane, photography, India and following a spiritual path. 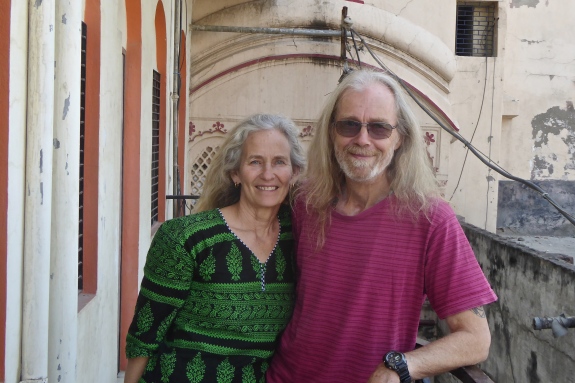 Together we watched the antics on the surrounding roofs from the safety of their balcony. Starting early in the morning, neighbor attacking neighbor, bombing unsuspecting passersby on the street below. The willing participants are mostly but not exclusively young people. 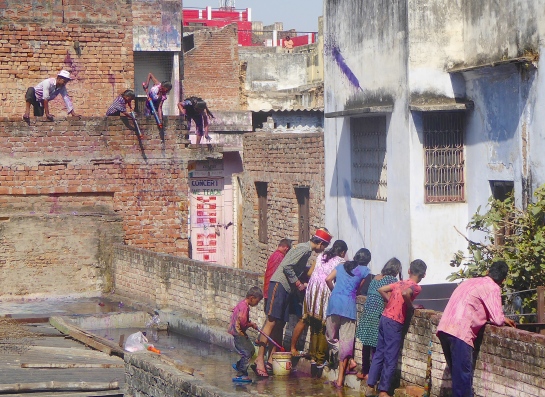 The fun continues all morning until around 1 pm, when it begins to subside. Declaring a truce until next year, residents wash down their roofs, scrub their bodies and change into clean clothes and relative calm is restored.

Our neighborhood is an exception. Here, at Chausatti Ghat, the symbolic depiction of feminine power within Hindu mythology is still present. Directly across the street from our hotel is a little temple that is said to have the power of no less than 16 yoginis.

While the celebration is fading out in the rest of the city it intensifies here. The street becomes clogged with worshipers wanting to make offerings of flowers at the temple. Temple bells ring without break. Well into the night the street remains choked. Getting back to our guesthouse was not for anyone suffering from claustrophobia. 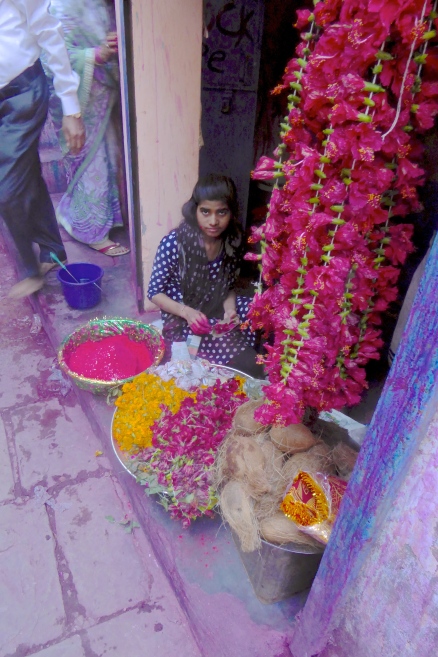 Even though Shree Café was closed for the holiday, Santosh had invited us to visit in the evening and join the family for thandai, a celebratory sweet, spicy milk drink, to mark the end of Holi. We had not anticipated the crowds we’d have to fight our way through to get there, but it was worth it.

Family and friends had gathered, all dressed in new clothes, the men in white kurtas, having washed off the color from playing Holi. The children danced without inhibition. It was our good fortune to finish celebrating this holiday with our Varanasi family.

It’s not easy to get up and on to the ghat before 6 am, but whenever we manage it we’re so glad.

Meeting Santosh we walked downstream beyond the crowded ghats,

where life beats at a slower pace.

And then turned into the lanes (gulies). Without Santosh we would have got hopelessly lost. 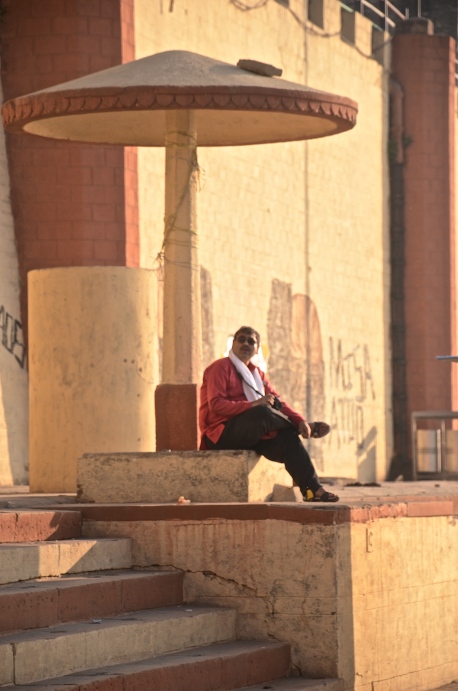 He led us through sleepy gullies, with men gathered at chai stalls still discussing the election.

In the early morning, long before dawn, the melancholy song from a man and his harmonium floats over the rooftops. He laments the passing souls who came here to shed their last tear of earthly existence and cast off their broken bodies to the funeral pyre. But, he sings; why should we mourn?  For they’re set free in the light, while we worldly ones struggle to find our way.

Around 4 am energetic chanting and bell ringing echo from the Chausatti temple.  Shortly after, a cacophony of mosque calls summon the faithful to prayer across the large Muslim section. The haunting sound as one imam leaves off and another begins, dragging the reluctant out of the oblivion of sleep toward the first prayer of a new day. Get up and shake off your drowsiness. Fritter away your time no longer. Pray to God now while there is still breath in your body. We can hear no political jihad, Al Qaeda or ISIS in his voice.

As we get ready for breakfast, the schoolmaster leads his students in call and response, his call eagerly returned by the joyous out of tune voices of his young pupils. Listening to all these sounds drifting through the early morning air, we are reminded that while so much has changed, yet so much remains the same in Varanasi.

10 thoughts on “Holi in Varanasi”