Just one day before the “bomb cyclone” swooped up the coast and left 15 inches of snow on the city we got out of Boston. The following day the airport was closed. But we got caught up in our own whirlwind that eventually got us on our flight from NYC to India, but for 18 hours it looked bleak. Virgin Atlantic notified us of a small change in the schedule, but one which made our tight layover in NYC yet tighter. Even the slightest delay of our 6 am flight leaving Boston would be cause for alarm. And if we did make the connection, we worried our bags wouldn’t – our train schedule in India wouldn’t allow us to wait for them to catch up with us.

So we decided to take a bus to NYC and stay overnight in a hotel at the airport and pick up the next leg of our journey at JFK the following morning. We threw everything together and managed to book what looked like the last two seats on the next bus to Manhattan. With little time to spare, we tried to get through to the airline to notify them we wouldn’t be boarding the plane in Boston, but the wait time was too long and we had no cell phone service. Nothing to do but leave and call again when we reached NYC. To cut a long story short, this was a BIG mistake.

Going straight to the airline desk at JFK, we learned it was not just a simple matter of notifying the airline staff in Boston we wouldn’t be taking the flight the next morning. Because we weren’t using the first leg of the flight, we were told our entire ticket could be canceled and we might not be allowed to board any other plane! They do not like no-shows. We could try buying new tickets for the next two legs of the journey (JFK to London and London to Delhi) IF there were available seats and at today’s inflated price. There would also be a penalty for not boarding the Boston flight even if we could get through to the airline and tell them beforehand. Further, the rep said, you’ll have to take this up with Chase, who’d booked the tickets. NOT very helpful. (We purchased the tickets from Chase credit card services using frequent flyer miles.)

At the hotel we reached Chase, only to be told they couldn’t do anything because their computer system was down. Without pulling up our record, they couldn’t even call and let Delta know we wouldn’t be on the flight in the morning. “Call back in two hours,” the rep said. We considered turning around and going back to Boston in time to board the flight in the morning. Too late for the airline shuttle, a limo service would still be cheaper than the potential cost of rebooking. But already exhausted, we decided to persevere with Chase. Throughout the night we continued to call every two hours, setting the alarm and trying to snatch sleep in between, only to be told the computer system was still down. Finally, we gave up and headed to the airport early, resigned for whatever fate awaited us. After a lengthy explanation to one of the Virgin Atlantic reps, she shrugged her shoulders and said,”You’re here now, you should just go ahead and check in.” And we did – with no interrogation. Thanks to busy phone lines, downed computers, and unhelpful help desks, we were able to pick up our flight using our existing tickets after all. With relief, I sank into my plane seat and finally relaxed. We were back on track for India!

The rest of the journey flowed smoothly and soon we were back in India in all its craziness, noise and unpredictability. Familiar but still exciting. Aware of how close we came to missing this moment, I loved it all the more. Ravi and Swarn made us feel at home in their new house on the outskirts of Gurgaon. A new development, it was so quiet at night with not even a barking dog, that it was hard to believe we were in India. 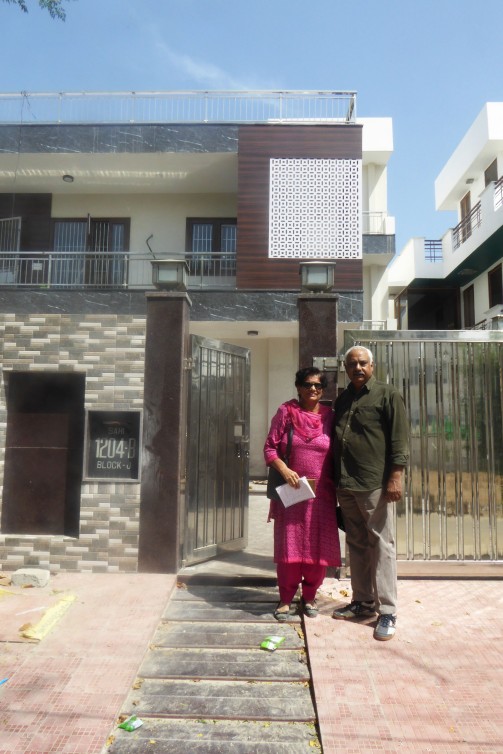 The next day we visited Kamal and Bhushan’s, the house was especially full with Shruti and Arvind and their two daughters, who’ve moved back from Bangalore to Delhi. New baby,Tanya, is so cute and lovable.

The mood was joyful, no one felt crowded, just happy to all be together again. We turn up every eight months – more mouths to feed – but they always make us feel welcome and ready to take care of whatever our needs.

Once again the family came to our aid in getting our cell phone activated. The government is now tracking and linking all electronic activity on different devices which has made it increasingly difficult to get a SIM card. All kinds of identification and verification are required including fingerprinting. It’s possible for a foreigner to get a SIM but it involves documentation – which we had, but it can take days – which we didn’t have. Our train tickets south were booked for the following day. Ravi and Bhushan took off for the Airtel store and came back an hour later with our SIM card!

The next morning we called Uber on our newly activated iPhone; The driver arrived almost immediately and skillfully navigated the traffic across town to the train station in plenty of time for us to catch the Rajdhani Express to Shiroda Beach. It really is an Express – not in terms of speed, but the number of station stops. On our 24 hour ride, ours was only the 5th stop. And there’s complimentary meals; for train food, it’s not bad. We took off exactly on time and were a mere one hour late in arriving. As my friend back in the US says, “You two are charmed!”

10 thoughts on “A Narrow Escape to India”