After my sudden hearing loss in July, for several months, it was questionable if we’d return to India again for the winter. But as Boston became colder and I began to adapt and feel stronger, I decided I wanted to give it a try. Two considerations were fewer destinations and flying when possible. A big concession for Gerard who loves trains, even Indian trains, with their inevitable delays of several hours, less than clean facilities, noisy children and snoring travelers.

Arriving in Delhi a month later than usual had some benefits. For one, we were not met by the thick blanket of fog of January mornings but the air quality was still very poor. We stayed again in Paharganj, the area of budget hotels, but managed to find a new hotel with the welcoming name, ‘Cottage, Yes Please!’ 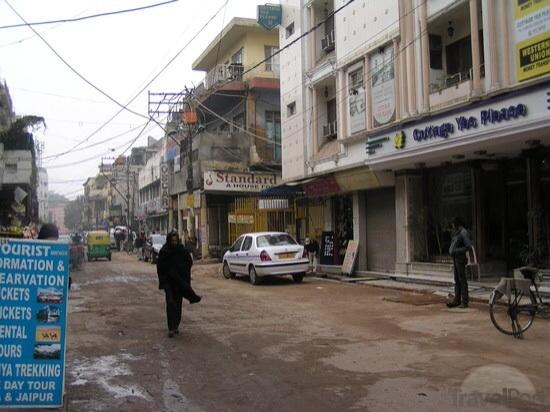 It was indeed relatively clean, the staff engaging and helpful. The noise and bustle of Delhi seemed louder and more distracting than I remembered, exacerbated perhaps by jet lag and a cold rain. Car horns, sirens, vendors chanting their wares, even a wedding procession complete with drums, horns and the obligatory bridegroom mounted on a white horse.

After nine months, we were all so pleased to see each other again. Even two-year-old Tania showed no distress at the arrival of the pale faces. We needed to replace our expired SIM cards, something that might sound simple but not in India. A lengthy procedure of identification checks, callbacks, all of which was expedited by Bhushan. Alone, it would have taken us three to five days. Tania maintained a constant, bilingual chatter. Initially, I could keep up, but as more people arrived and the noise level rose, I was losing it. After the umpteenth time of repeating at a shriek, her big sister Simrita clearly enunciated for me, “She’s saying, Auntie, switch it on! ” The switch turned on a beauty pageant doll dressed in a crinoline skirt of blue flashing lights who twirled to, what I think was, raucous Bollywood music. Over and over again Tania wanted the doll ‘switched on.’

The next day, while on the long metro ride out to the family in Gurgaon I was fascinated watching a young couple, the pretty girl who had the misfortune of a protruding overbite of large uneven teeth. Not an uncommon sight in India where most people cannot afford cosmetic dental work. This girl had the biggest and cumbersome brace contraption I’d ever seen, which drew further attention to her jaw. But her boyfriend, who incidentally was blessed with a perfect mouth of teeth, did not appear to even acknowledge her disfigurement but acted so sweetly and lovingly toward her. What a good feeling it gave me.

By the end of the day, the jet lag caught up and we were both exhausted. On the crowded metro back to our hotel, a man offered me his seat. Given the hour-long ride and my state of exhaustion, his kindness took on a greater significance. Relaxing in comfort, I immediately nodded off, sliding on to my neighbor’s shoulder. He didn’t react as Gerard nudged me awake with his foot, giving me a pained look. It got me thinking about how many times on public transportation that in the jostling crowd, the falling into each other’s lap is routine. The crush of humanity makes rubbing shoulders unavoidable and acceptable. On other hand, if a man tries to take advantage of the situation as an opportunity to grope, he is likely to feel the swift, sharp stab of a hatpin. The young Indian women of today are quick to rebut sexual advances, refusing to become victims. With its unfortunate tradition of abuse, India is beginning to fight back.

The following morning we trekked back to the airport for our flight to Goa, a mere two hours compared with a thirty-hour train ride. But of course, that does not reflect the time taken navigating airport check-in, though nowhere near the thoroughness of TSA, then the long anxious wait for our bags at the other end. Gerard is quick to remark that train stations are still a true Indian experience, while Delhi airport is the same as any other large international hub. But for me, it’s a relief to know that by the end of the day I will be in our guesthouse nestled at the edge of the jungle with the birds singing conducive to a good night’s sleep.

30 thoughts on “Flying through Delhi”