Gerard had read about Kuchaman and an interesting old Fort on an obscure travel site. It sounded a quiet place off the Rajasthani tourist route. The site mentioned an ultra luxurious hotel occupying a large part of the Fort. Not that we were serious about staying there, but we emailed for the price. We got no response. And even though we couldn’t find another hotel with a working phone number — only a reference to Hotel Gorband with no contact info. Still we persevered. All in spite of the fact that whenever we mentioned we were going to Kuchaman, the response was, “Why?” The guesthouse owner in Jaipur said he’d known one guest like us move on to Kuchaman…but that was ten years ago.

As we pulled into the railway station 11 Km outside town, there wasn’t even a platform to step out on, a long way down to the ground. Without a rickshaw in sight, we had to deal with the taxi drivers who crowded around us all talking a mile a minute in Hindi. They didn’t recognize the Hotel Gorband and no one could find a phone number for it. Even the luxury hotel was not an option; it had folded two years ago. Does this mean we can’t even get into the Fort? But that’s what we came for.

Communicating as best we could with sign language, we set out to see what we could find. The sun had now faded and as we approached town, everything looked shut down. Eventually we found Hotel Gorband, sitting above a motorcycle repair shop. It did exist after all but looked far from inviting. Before the taxi could take off, Gerard made the driver understand we wanted him to hang around. It took only one cursory look at the drab room to realize the hotel wasn’t going to work. My mood was sinking at the prospect of having to stay even one night in Kuchaman, let alone four. And when I voiced this to Gerard, he replied, it wasn’t helpful. Another fine mess he’s got us into, I thought. After all, it was his idea to go off the beaten track and come here.

Back in the taxi, the driver now grasped the situation and took us back to the bypass road where there was an innocuous looking roadside stop (restaurant on the ground floor, rooms above) for Indian tourists, with the illustrious title, ‘Sharda Palace Hotel’. The manager, sitting alone in an echoingly empty restaurant, sprang to his feet to welcome us. To our relief he spoke some English and showed us a room, basic but spacious. I tried to visualise myself holed up there for the next four days. It was a struggle. 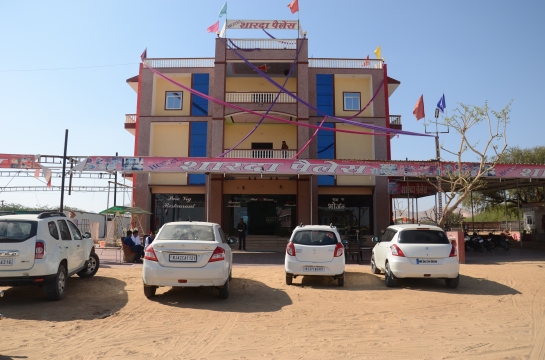 Throughout the cold night I lay awake buried under two thick blankets listening to the lorries roaring by, with music blasting to keep themselves awake. As we sat at breakfast in the virtually empty restaurant looking out on a windblown highway, it was as if we’d dropped into Baghdad Café or any southwest road stop. Except here, no one spoke English. I could detect that Gerard was also beginning to wonder how we could escape. But we had already purchased our tickets for Bikaner, a good five hours away. Too far to just jump in a taxi and make a hasty exit. So what to do for the next four days?

I had forgotten that change is the inherent nature of the world and things will change here as well. But for the better?

the beautiful girl who swept our room every afternoon

The first day we hung around the ‘Sharda Palace’; there was plenty of time to see the one attraction in town, the Fort. In the afternoon, we walked out into the surrounding countryside, so peaceful after Jaipur. In a small hamlet, a group of women and children were standing in a doorway, watching these odd looking people walk by. I said, “What a great picture!” Gerard urged, “Go ahead and take it.” Pulling out the camera encouraged others to come out and have their picture taken also. How simple and uncluttered they seemed to us. I think they enjoyed having their picture taken as much as I enjoyed taking it. It looked like things were beginning to turn around for us.

The next day, the hotel manager, now introduced himself as Hariprasad. He offered his son to take us to the Fort on his motorbike and act as our Guide. Gerard questioned three on a motorbike with no helmets? But Hariprasad assured us that Kuchaman had no police and there would be no problem. Mohit first stopped at two ATMs – one with no money, the other with interminable long lines, one line of men, another of women. We moved on.

Nearer the Fort, the town became more interesting, with white and blue painted limestone buildings and narrowing old streets. We parked the bike and walked up to the Fort, followed by a friendly dachshund, belonging to the gateman.

The admission included a guide who couldn’t speak one word of English; lucky for us that Mohit’s English was near perfect. Our fortune in Kuchaman was looking up.

The sprawling Fort dates from1635. Built on a pinnacle, it’s a smaller version of the Jodhpur Fort. The Royal family of Kuchaman Province lived there until just after Independence. A large portion of the Fort had been turned into a high-end hotel with dozens of rooms, priced up to 12K Rs. But that was two years ago. A new owner is now renovating toward reopening, no doubt at even higher prices. There were endless rooms of well-preserved frescos, 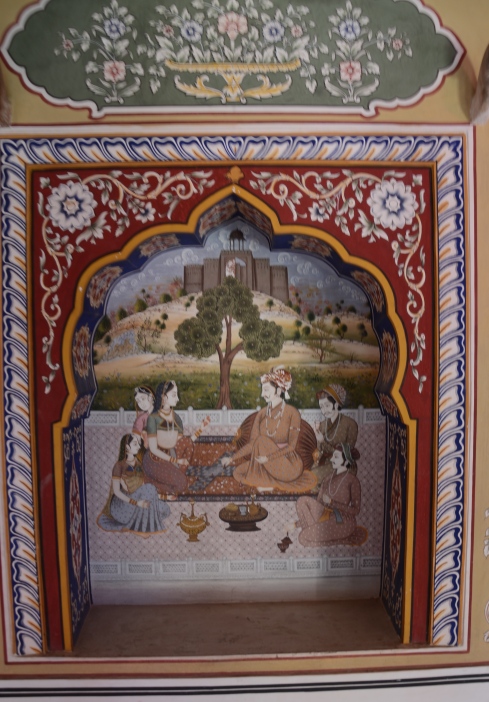 The Queen’s Boudoir, decorated in mirrors, the glass from Belgium, and a game room surrounded by viewing balconies, with a human chess board laid out in stone on the floor. Last but not least, a karma sutra room with risqué frescos, the locked door opened only for private viewing. Only one other party of Indian tourists arrived at the Fort the whole time we were there.

The following morning, Hariprasad arrived at the hotel saying, “Come quick! There’s no queue at the ATM.” We jumped on his bike and rode back into town to find by now a line had formed. Hariprasad insisted on taking us to the front where he requested we go next. The Indians graciously complied. Thankfully there was still money in the machine and we each managed to draw out the tourist allotment for the day, effectively doubling what we expected. Staying to explore the old part of town, shopkeepers and shoppers alike stopped what they were doing in surprise as we passed. Clearly, Westerners are rare.

That evening, Hariprasad invited us to his home for dinner. I marveled at how things had evolved. Here we were going to the home of a man who three days ago I had bargained with for a room – a room that had seemed sparse and uninviting had now become our home away from home. We were going to meet his wife at their house in a town that I had dismissed as only a huddle of buildings along a highway and had wanted to leave as fast as possible. How quickly things can change in three days! These are the adventures of traveling with Gerard. 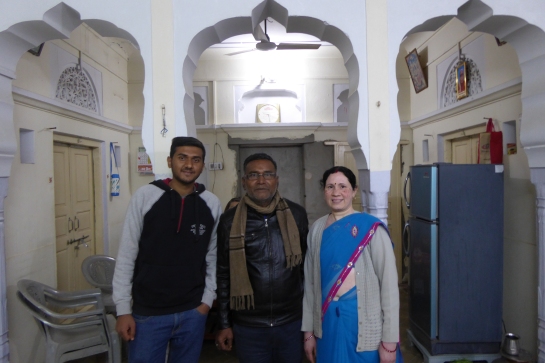 It was a perfect ending to our stay. Hariprasad and his wife, Saroj, couldn’t have been more welcoming. They live in a house built by his grandfather eighty years ago in the old fashioned style of rooms around a courtyard. We feasted on a home cooked meal that was prepared jointly by husband and wife, not typical in traditional India. Saroj was as friendly toward us as her husband and son had been.

On the way back to the hotel, Hariprasad told us that he didn’t understand how we had become so close in such a short time. He had never got that friendly with any guest, what to say, about inviting them to his home. And it was true for us too; even with our limited ability to communicate, we felt like he was family. 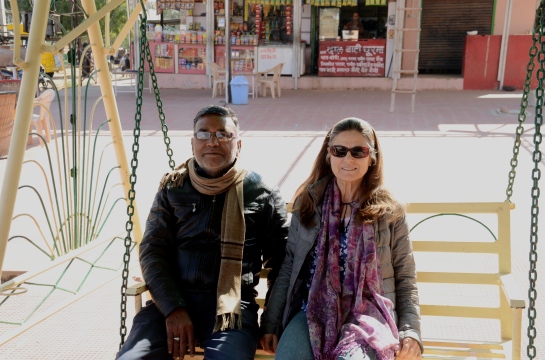 But this was not quite the end. The following day, while waiting for our evening train, the hotel erupted in activity.

First a meeting of local media executives, and then the rest stop of Sapna, a beautiful young Rajasthani pop singer and her entourage of musicians, bodyguards and bouncers. Granted audience, we were taken to her resting room where she lay under the blankets with her mother.

She got up and greeted us warmly, hugging me as if we were old friends, and posed with us for photos. She looked even younger than her 21 years, but behaved with the poise of a celebrity. At last, Hariprasad had his driver take us to the railway station saying how much he would miss us and that now the hotel would seem empty. For our part, Kuchaman is now an especially pleasant memory.

20 thoughts on “Kuchaman: From a Sow’s Ear to a Silk Purse”