It’s been twelve years since we first visited Jaipur and it wasn’t one of our favorite destinations. The “Pink” City is famous for its textiles but we’d not been in the mood for shopping and were put off by the noise and chaos of its busy streets. We only managed to visit the Hawa Mahal or Wind Palace. This time, we stopped for a day and a half, primarily to visit the Amber Fort/Palace outside the city. Vinayak Guesthouse, close to the railway station, was comfortable enough with an excellent restaurant on the roof. In the afternoon we decided to brave the clogged streets to visit the City Palace. The grid of the old city lined with pink buildings and shopping arcades, survivors of modernization. Unlike most Indian cities, old Jaipur has not been torn down and rebuilt in concrete. 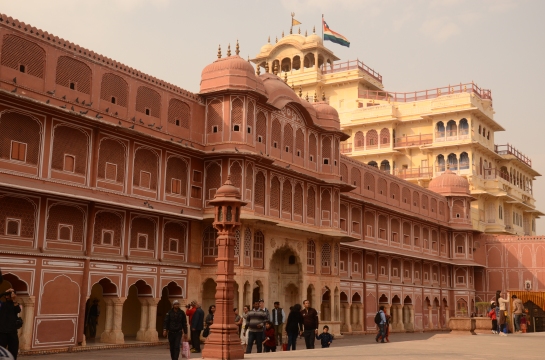 The City Palace was built in the 1720s, part of which is still occupied today by the family of the once ruling Maharajahs. We could have taken a private tour of their quarters for a mere addition to the entrance fee of 2,500 Rs each. Among the formal rooms open to the public was the Peacock Courtyard with its four painted doorways depicting the four seasons and the Public Hall of Audience, its walls adorned with old photographs of receiving dignitaries, including Lord and Lady Mountbatten. 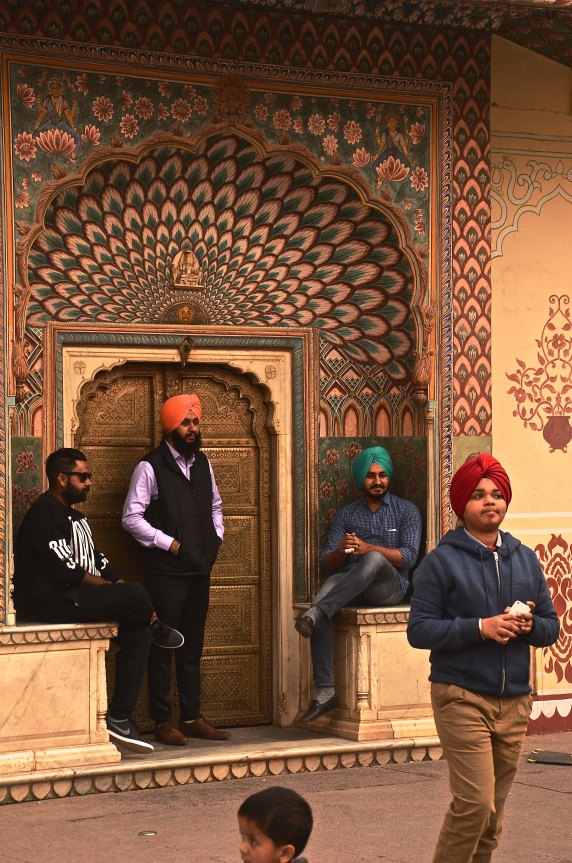 A textile museum showed elaborate clothing of woven gold and brocaded fabrics from the royal wardrobe. 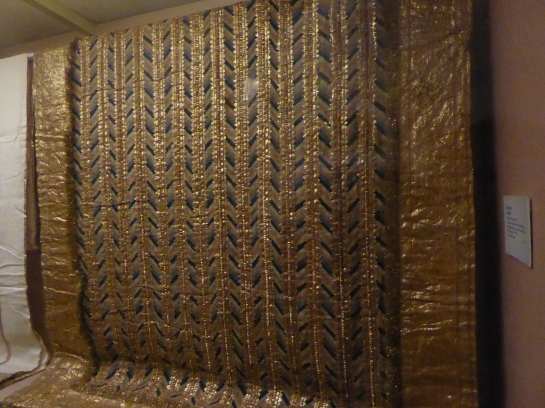 As Gerard took pictures, I struggled with the manual settings on my new camera. It’s always easier to take automatic but then what’s the point in having a sophisticated digital camera? I could be walking around like everyone else with an iPhone and a ‘selfie’ stick. I imagine them going home with their pictures of Jaipur – each one with a distracting ‘selfie’ in the foreground. Every picture will be of themselves with a slightly altered background. 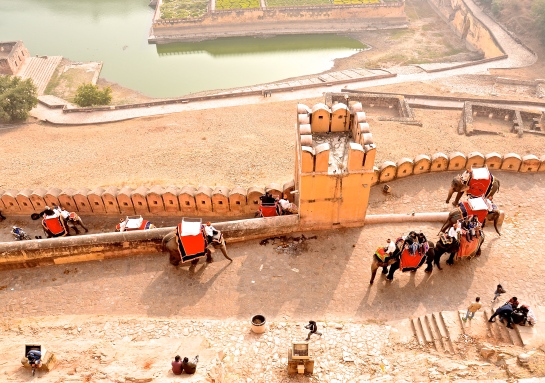 The next morning we negotiated with the same rickshaw driver to take us 11 km out to the Amber Fort. Sitting high up on a rocky ridge, the Fort is reached by a long winding footpath, swarming with visitors (the more so being Sunday). For those less inclined to walk, the hike could be made precariously balanced on top of elephants. We were both disturbed by the sight of these regal animals, their ears decoratively painted, lumbering up and down all day. 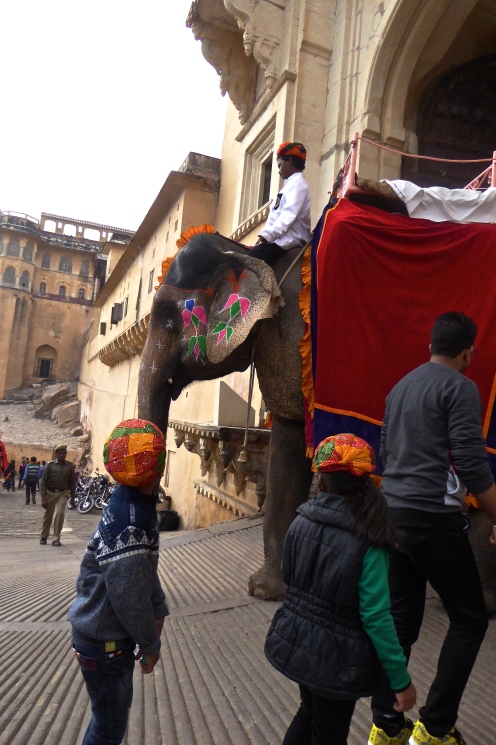 The Fort was amazing. Built in 1727, the architecture is Rajput, although the mirrored mosaics and the Sheesh Mahal private chambers for the Maharajah and Queen are clearly influenced by Mogul ideas. 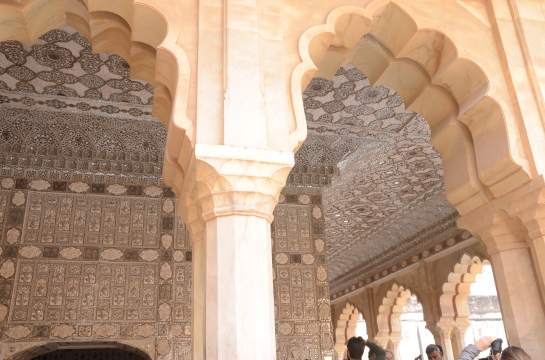 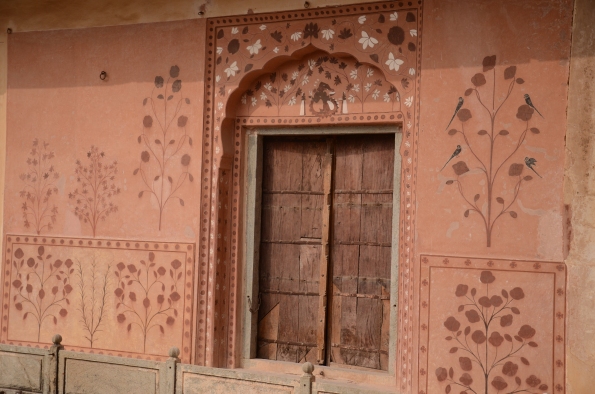 On the way back we stopped at the Kanak Vindravahan garden, a welcome oasis of peace and quiet after the noisy mob scene at the Fort. 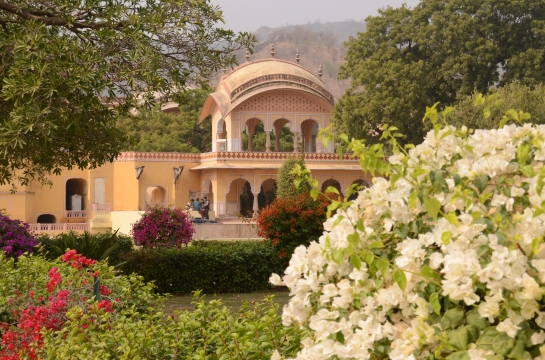 Further along, was an esplanade with a grand view of a Lake Palace, alive with a fun fair atmosphere. We watched three little boys clowning around while half-heartedly making dough balls for feeding to the fish, a favorite lakeside activity. 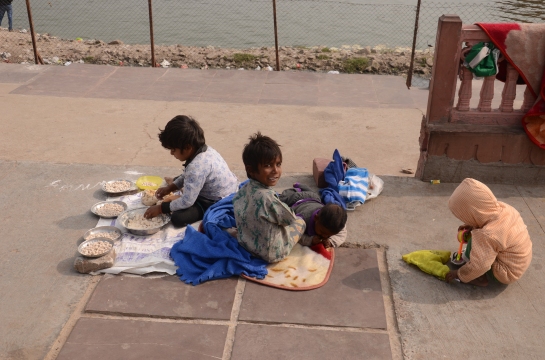 We returned to the guesthouse for an excellent thali and then walked back to the railway station to catch the afternoon train to Kuchaman. An extended family crammed into our compartment, making it seem like general seating rather than reserved 3AC. We were initially annoyed at all these people pushing their way in with no regard for reserved seating. But like many times in India, things turned themselves around.

A young saried woman slid in opposite us dragging a boy who was obviously mentally disabled. She kept one arm constantly across to hold him back. The other side of her was a slightly younger boy absorbed in his iPhone. She spoke good English and introduced her two brothers accompanied by their wives and children. The woman explained they were from Bikaner and had all been visiting her husband who lived in Jaipur. Her nine-year-old son (his size made him seem much older) was born with cerebral palsy. “He is 99% disabled,” she said. “This is why I don’t live with my husband in Jaipur. Back in Bikaner, I have my parents and my in-laws to help take care of my son. I cannot leave him for a moment.” I noticed a large burn on the boy’s hand. I tried to contemplate that kind of constant care. And she’d been doing it for nine years, not to mention caring for her other son, only one year younger. Within a short time, we were all friends and she insisted that we visit her home in Bikaner where we were headed after Kuchaman.

3 thoughts on “The Pink City and its Palaces”