Even after spending eight winters here, India still manages to deliver the unexpected. Shortly before we left, we heard rumblings about the government’s effort to eliminate black money. Their strategy was to remove the large bills in circulation and replace them with new ones. This would flush out anyone hoarding large sums with the purpose of buying and selling off the grid. Reportedly only 2% of the population pays taxes. Prime Minister, Modi, felt the strategy had to be implemented overnight in order to catch out the hoarders. The intention is laudable; the implementation a disaster. “Black” money has long been a way of life; hiding the actual selling price. With any large purchase, for example, a house, there’s always a part of it that’s paid for with black money, reducing the taxes.

People rushed to banks to exchange old notes. But unfortunately, the government hadn’t printed anywhere near enough new bills to meet demand. Over a two month period reported 107 people throughout India died waiting in the long lines for the new currency. Now, two months later, there is still a severe scarcity of new money and limitations are imposed – Indians can only withdraw 24,000 rupees from their bank account per week. But often times it takes numerous visits to the bank, either because the queue is too long or the bank has run out of currency. For the poor it’s even worse; many peasants don’t have an ID to open up a bank account, meaning they can’t make the exchange. And the few banks that will do the exchange without an account are only in the major cities.

But there are far broader ramifications. Because of the scarcity of currency, building projects may be on hold; clients can’t pay the contractor who in turn can’t pay his laborers. In rural areas, there was difficulty making change for a 500 Rs not in previous years, now the new 2,000 rupee note is four times the problem. And the root of the problem is not destroyed; corruption continues as people begin to hoard the new currency. It’s a one-time fix only.

It has been a disaster for the tourist industry. Foreigners can only withdraw (4,000Rs)  $75 a week. Even though for most that is adequate, going to the bank on a nearly daily basis is a huge hassle — and what about the small towns that don’t have banks? The ATMs have dried up and most of the small businesses don’t take credit or debit. We read a report in the newspaper that said tourism in Goa (the largest tourist area) has been severely impacted. Our trip this year could have turned into a nightmare if it hadn’t been for the guidance of our Indian family who has walked us through the process. We’re hoping that within the next month or so the situation will have improved and the ATMs will be functioning more normally.

Like the explosion of cellphones in India, which took off much faster than the West mainly due to lack of landlines, scarcity of cash is driving demonetization. Not just greater use of plastic, but also e-payment applications. PayTM on cellphones has rocketed. This is all fine for the technical savvy young middle class, but what about the rest of us? The older population, tourists and Indians alike, struggle with the technology. Someone in the family who used PayTM at the local grocery store, inadvertently was charged three times! Fortunately, the owner was an honest man and alerted her to the error. And again the poor, who don’t have a smartphone or a bank account to load money on PayTM, are left high and dry.

The move away from a cash economy is less appealing to us. Gerard actually likes handling cash. It’s another shift from actual to virtual and anyone that knows Gerard can guess how he feels about that. 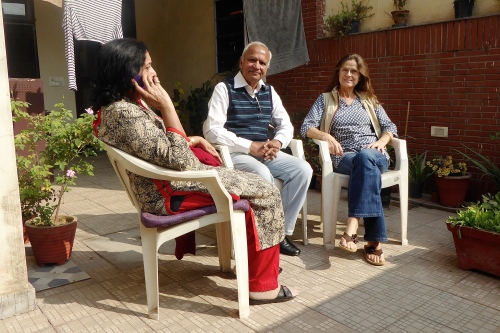 To end on a positive note, the weather is warmer than normal for January, and we received our usual heartfelt warm greeting from our adopted family. We are most fortunate.