At first glance, the peaceful town nestled in the hills at the beginning of the Kullu Valley has changed very little since we first discovered it eight years ago. There are few other places in India that you can say the same. Returning here almost every year, everything is familiar – the prayer gong resounding in the monastery in the early morning, pilgrims and Tibetan refugees performing kora, circling the lake. The Hindus and Buddhists appear to live in peaceful harmony. There is still little traffic and few places to eat, though more than last year. Thankfully, this has not become a tourist destination but there are a few more westerners. In the past, the town has been the meeting place of some of our strongest friendships, Frederic from France and Peter from the US. Again, we have connected with two couples of well-seasoned travelers around our age who also return here regularly. 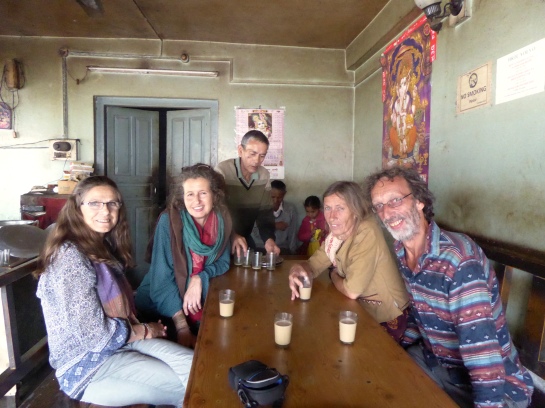 They each have their stories of traveling in India and how it all began. Marina from England, starting traveling immediately after leaving college. Seeing a lot of Asia, she fell in love with India. For many years, she has divided her time between England and India, returning to her flat in London in the summer to make enough money at waitressing and gardening to return to India again.  She met Rajiv in Gokarna seven years ago. 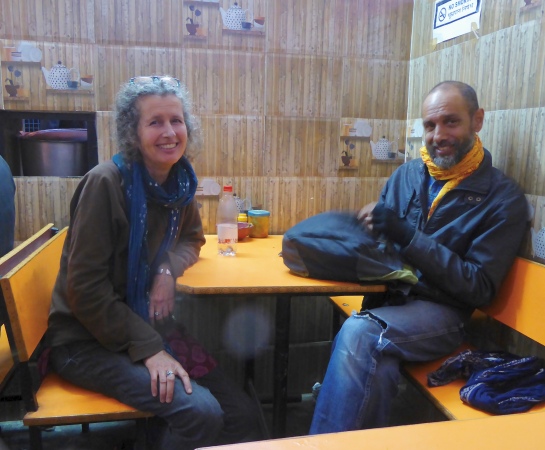 Marion first made several trips to India from Germany in the mid 70s overland via Iran, Afghanistan, and Pakistan. She told stories of the hassles of traveling as a single woman, especially in Pakistan. For a while, to finance her trip she hooked up with a scheme of delivering new Mercedes to rich Iranians who were only allowed one car. She would pick the car up in Munich, registered in her name, and drop it off in Tabriz. She also now returns to India with Jhurgon for several months each winter.

Seeing Sapna and her family was a reunion; they were so happy to see us you’d have thought we’d known them our whole life. Such is the Indian disposition. She’s still scraping out a living at a small restaurant on the main street (there are two streets in town). 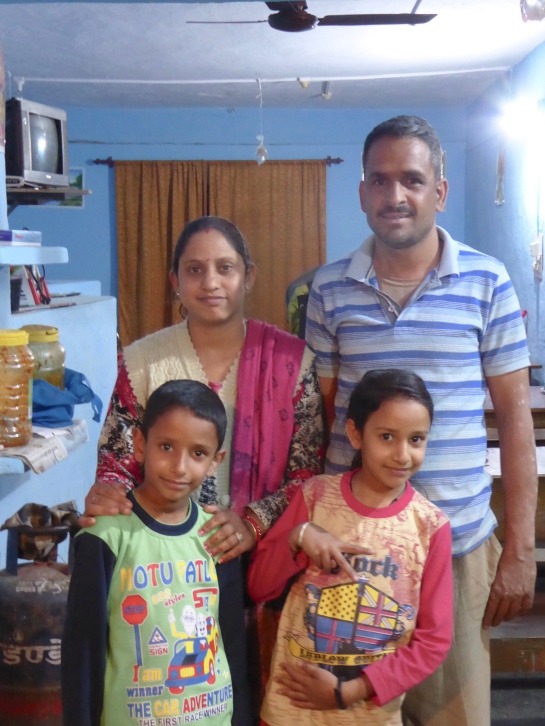 One afternoon, she and her husband took Gerard and I on a short trip to see the progress on their new home. With very little money, Kheem Chand is doing most of the work himself and progress is slow. 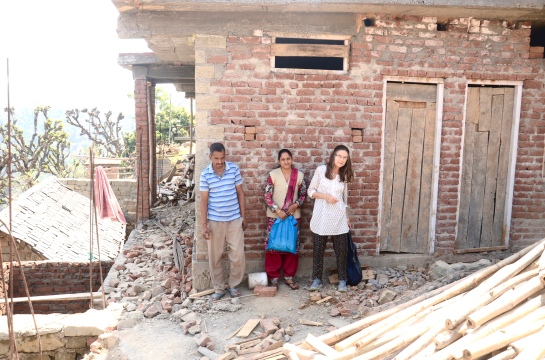 Our spacious “apartment” complete with kitchen and large windows looking across the hills and down on the town, is arguably the best accommodation we’ve ever found in India, and definitely the best value. 345 steps up from the town, the barking gangs of dogs are distant, and the destructive monkeys relatively sparse.

Our room is the top finished floor of the yellow building next to the big blue building.

Our Hindu landlady rang the doorbell with aloo parathas on Easter Sunday for breakfast. (Did she even know it’s Easter Sunday?) The town is so small, that whenever we come down the hill, we bump into the same people. The gentle-faced monk who opened up to us a year ago and told us the fascinating story of how he entered the monastery as a young boy. Now in his 30s, he’s still serving cappuccino in the monastery cafe below. I find this place comforting.

But there are changes and it may not be so tranquil beneath the surface. The town is spreading out further into the countryside, with new buildings cropping up, including more hotels serving predominantly the ever growing Indian tourism. A hard top road connecting outlying villages is being financed by the state. But more disturbing is a hint of discontent between the Hindus and Buddhists. Perhaps it was always there and we were just unaware. But it’s disturbing to see the thick curtains of prayer flags beside the lake burned. No one has taken responsibility. There may be some jealousy between the two communities, and understandably. While the Buddhist community is getting outside assistance, the Hindus have no such luck. Until now, the only murmur of discontent that we knew of was from a restaurant owner who said a few years ago that the gold statue of Guru Rimpoche overlooking the town was far bigger than expected. The Guru is famous for bringing Buddhism to Tibet, he did his spiritual practices here.

The day before our German friends left, we accompanied them on a walk to a lake several km above the town. When we set out the weather was clear, the sky blue. We climbed high up the hillside, at first via steps, later clambering over treacherously uneven and stony ground. Within a couple of hours, the sky darkened and thunder began rolling around the hills. A chai shop was in sight and everyone began climbing faster. We reached there just before a downpour. The walk would have been beautiful if we hadn’t been watching our feet and going so fast to beat the rain.

7 thoughts on “Mellow in Kullu”